Mark Simon counts more than 30 years of experience working in the entertainment industry as a producer and director for live action and animation, writing and lecturing, and amassing over 5,000 production credits.

Mark is currently storyboarding the hit series The Walking Dead and provides full animatics for the series. He also produced the animation for Fox’s film Tooth Fairy 2, starring Larry the Cable Guy and is the animation producer on Universal’s current release of the Little Rascals movie. Timmy’s Lessons In Nature, the animated shorts which Mark Simon developed, directed and produced, won Grand Prize in Nickelodeon’s first-ever Nicktoons Film Festival. He was also head of story on WB’s Hong Kong Phooey feature starring Eddie Murphy and on the animated feature, Barbie: Video Game Hero.

Mark was part of the Toon Boom animation team which won the 2012 Prime Time Engineering Emmy for the Storyboard Pro software. He was also inducted into the DAVE SCHOOL (Digital Animation & Visual Effects School) Hall of Fame in 2012. 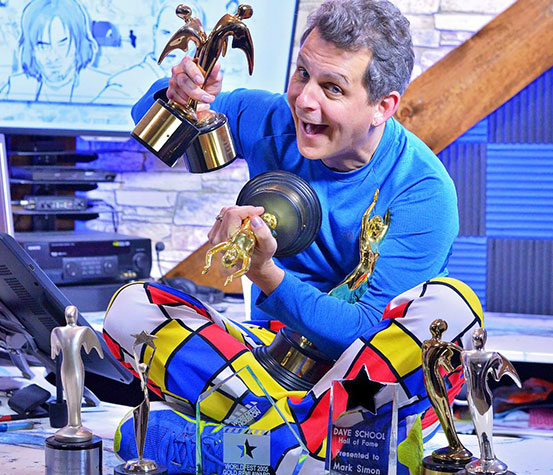 Mark has pitched and sold more than 35 production and distribution deals for his original concepts, and worked with Disney, Nickelodeon, The Golf Channel, HSN and other networks pitching in-house productions.

Sell Your TV Concept Now, Inc. is one of three companies Simon owns and successfully runs out of Orlando, Florida. It was inspired by countless requests over the years from both industry insiders and interested outsiders wanting to tap into Mark’s pitching techniques and success record.

His & Storyboard, Inc. company, the largest supplier in the Southern U.S., provides storyboards, illustrations, cartoons and storyboard comic book illustration to the entertainment and publishing industries, including clients such as Disney, Universal, Viacom, Sony, HBO, Nickelodeon, FOX, Steven Spielberg, USA Networks, ABC Television and many others.

Mark is also the author of thirteen popular entertainment industry texts such as Producing Independent 2D Character Animation and Storyboards: Motion In Art, and has written articles for AWN.com (Animation World Network), Animation Magazine and others.

Check out Mark’s long-running video blog, The Making of a Dream. This blog chronicles the making of the animated show, Dream Factory, from concept through production and into distribution. Go to
http://www.awn.com/blog/making-dream-episode-1-what-blog-about

He lectures around the world at major conferences, conventions, entertainment trade schools and universities, and is a second degree black belt and two-time national champion in Tae Kwon Do.

Mark Simon is an innovative artist whose work has been expanding the landscape of storyboarding for over 20 years.
Does your resume suck? Probably. Mark and Jeanne Simon, authors of Your Resume Sucks! are interviewed on NBC Daytime about their book.
Back in 2003, animation director Mark Simon, along with Bill Suchy of Orange TV, produced this short documentary on how to create 2D animation.